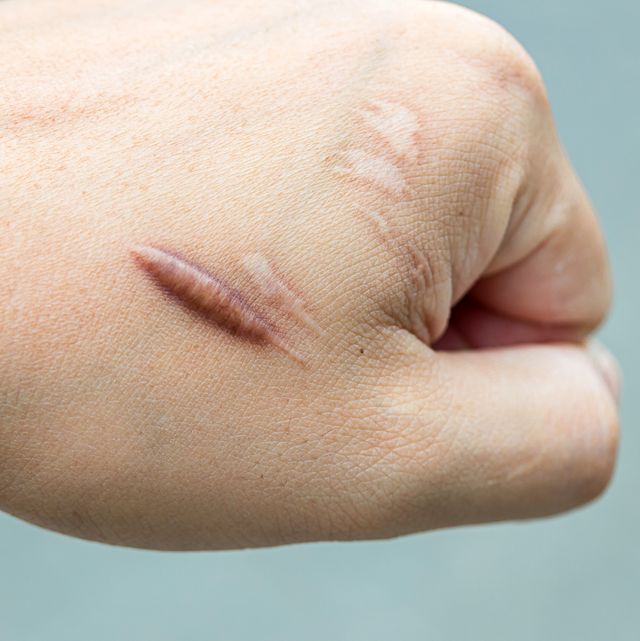 How to get rid of old scars on Body: Natural and medical remedies

Scars form as a result of the overgrowth of tissue at the wound’s surface after the skin has healed from an injury. Scars form as part of the body’s normal reparative procedure. Scars fade with time and may eventually disappear. Keloid scars are common scar that develops as a thickened area of skin around a healed wound.

How common are scars?

Almost everyone will have some sort of scar on their body at some point in their lives, whether it be from an accident, a medical operation, or an illness such as smallpox, acne, or pimples. Scars form as the result of the body’s normal healing process. Scarring occurs due to the normal healing process for the skin and other tissues after an injury. Except in the case of the mildest of injuries, nearly all wounds leave some sort of scar. Scars can develop after a person has been injured, has had surgery, or has a skin condition like acne.

How does scarring happen?

When the skin is injured, the tissues underneath it break apart, which results in the production of a protein known as collagen. When tissue is injured, collagen begins to accumulate there, which promotes healing and helps to make the wound stronger. Because new collagen continues to grow over the course of several months and the blood supply continues to expand, the scar continues to become elevated and lumpy.

What are the signs of a scar?

Scars vary in appearance and severity based on a number of factors, such as the person’s skin type and location, the direction of the wound, the severity of the damage, the age of the scarred individual, and the quality of their diet. Some discomfort or itching is to be expected. A scar might be raised, recessed, flat, or even colored. Scar tissue develops in response to damage and may appear either externally or inside. Scar tissue can make sure people uncomfortable by causing discomfort, tightness, itching, and limited mobility. These symptoms may manifest years after the initial injury because of the way scar tissue develops.

What are the types of scars?

These thick, spherical, uneven scar tissue clusters grow near the site of a wound on the skin but beyond its borders. They’re usually redder than the surrounding skin. Post-wound collagen forms keloids. Scars can appear everywhere. However, the chest, back, shoulders, and earlobes are more common. Darker-skinned persons have them more often. Keloid scars can appear a year after skin damage.

Scars develop as a result of the breakdown of tissues that occurs during the healing process after an injury. Acne and uneven pigmentation on the skin can also lead to facial scarring. Scars can be caused by a variety of things, including harsh weather conditions. Scars can develop for a variety of reasons, including infection, surgery, injury, or inflammation of the tissue. Inflammation of tissue can also result in scar formation.

How are scars diagnosed?

Scars are often diagnosed by dermatologists by first identifying the type of scar and then examining the size and location of the scar. And the consistency of the scar when it was examined physically. Scar tissue is created whenever the body is attempting to heal a wound. Scar tissue is made up of a stiff, fibrous protein known as collagen.

Home and natural remedies for scars

There are a few methods of home remedies. A few are given below.

Dab a cotton ball soaked in lemon or lime juice onto the scar. Wait a few minutes before washing this off your skin. The juice’s acidic properties aid in exfoliating dead skin cells from the scar’s edge, which in turn can reduce the scar’s redness and overall visibility.

You can use the gel that you buy in a store or peel the dark green outer layer off of an aloe leaf. Scars should be treated with clear gel twice a day using a gentle circular motion. After 30 minutes, wash off the gel with cold water. For best results, do this twice a day, in the morning and before bed.

Massage the scar for several minutes after emptying a vitamin E pill onto the scar. Remove oil and do this several times a day.

Mix a solution of one tablespoon of apple cider vinegar with three teaspoons of purified water. Apply the cotton ball soaked in the solution directly on the scar. Make sure the cotton ball doesn’t move by covering it with a Band-Aid or some medical tape. After letting the solution sit for a few minutes, wash it off and follow up with a moisturizing wash to help restore your skin’s moisture.

A scar correction can be performed by a skilled practitioner. Scar revision refers to any surgery performed on a scar in order to improve its visual appearance. The scar’s visual appeal could be enhanced with correction. This technique can help a scarred area of the body resume its normal functions. And it helps with the itching that sometimes comes with scars. Scars of many different kinds can be treated effectively and safely using laser procedures performed by dermatologists.

Some of the treatments are as follows:

Can we prevent scars?

Scars are created mostly during the healing process of the damage. Even though wounds that are healing may itch, you shouldn’t give in to the impulse to scratch them. Scratching an open wound or picking at a scab creates increased inflammation, which increases the likelihood that a scar will form. Therefore, it cannot be avoided 100%.

Do scars fade, shrink or become less noticeable over time?

In the beginning, a scar will darken normally, but after some time, it will begin to lighten and become less obvious, and this is also the case with many scars treated at home. On the other hand, acne scars that have been depressed may never go. An all-natural approach may be the best option for those who want to minimize the appearance of a scar. Many people have faith that healthful alternatives can be just as effective.

When should I see my healthcare provider about a scar?

If you find that you have a scar on your skin but can’t place when or how you got it, you should consult a medical professional as soon as you can, whether it be a general practitioner or a dermatologist. Before attempting any kind of treatment for the scar, it is important to consult with a dermatologist to make sure that the scar is in fact just a scar and not something else. Scars have the potential to become a fertile foundation for the development of cancer in the skin.

Hypertrophic Scarskeloid Scars
How to Get Rid of Dandruff?
Best Dermatologist in Kukatpally, Hyderabad